The RDX3 automatic ballistic witness recovery system is built to recover bullets from test fires in the best structural state possible, allowing a consistent reproduction of the particular ballistic signature that is made by the rifling in the barrel of the gun. 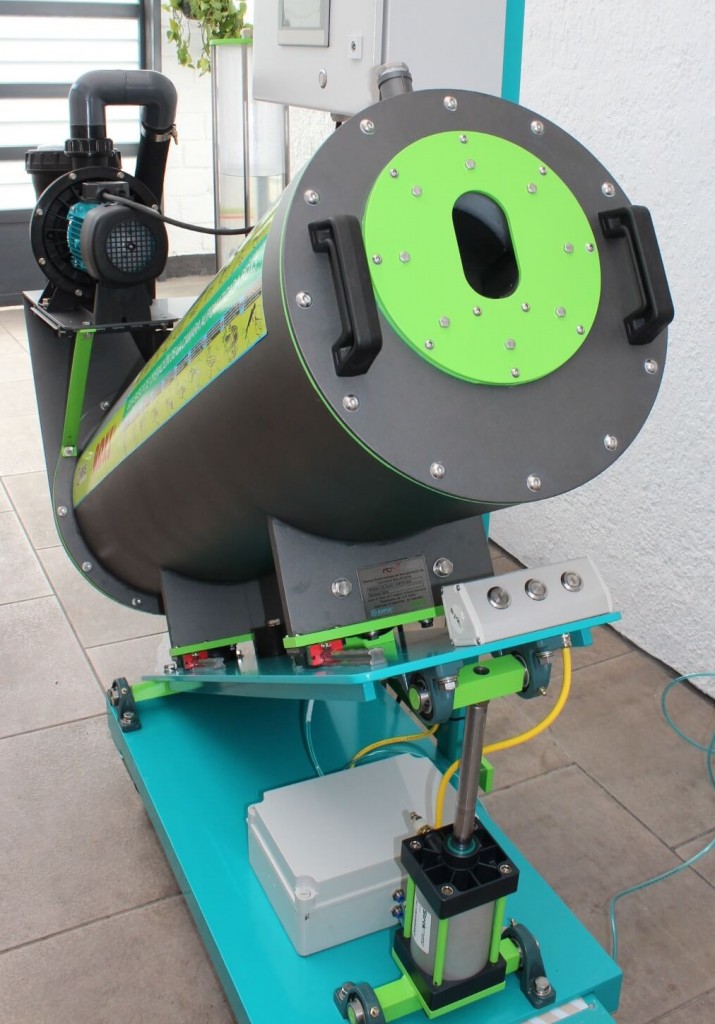 The RDX3 automatic ballistic witness recovery system is built to recover bullets from test fires in the best structural state possible, allowing a consistent reproduction of the particular ballistic signature that is made by the rifling in the barrel of the gun. This ballistic signature is used in forensic analysis in order to identify firearms and tool marks by different means (microscopes, electronic systems).

The RDX3 recovery system is manufactured by the inventors of the technology, which is covered by a patent pending with the Instituto Mexicano de la Propiedad Industrial (Mexican Industrial Property Institute), under file IMPI Number: MX/a/2012/004821, dated April 25, 2012.

Therefore, the design evolution of the original RDX ballistic chamber has been structurally modified to incorporate technological innovations that substantially increase its capabilities and security, functionality and efficiency, producing a new and more advanced generation of automatic ballistic chambers known under its trademark name, RDX3.

These technological innovations that have been incorporated exclusively into the new ballistic RDX3 bullet witness recovery chamber, consist of:

The RDX chamber is built with a stainless steel cylinder that is assembled by means of clamps that are binded together with high quality screws, using a special polymer packing that provides an airtight seal. Once the module and tubing are assembled, the total length of the chamber is only 1.80 meters, with a width of 58 cm, which allows for easy transportation and maintenance.

The liquid that is used for the recovery of the test fired bullets is made of the original “Arfus-Gel” ballistic gel with special and exclusive formulation for the RDX3 chamber that when mixed with water provides three main characteristics: a thickness that is quite efficient and has a wide range of rheological characteristics (that is the relation between the stress and deformation of the fluids), permanent suspension of soluble ingredients and stabilization of emulsifiers.

The advantages of this application of the gel results in efficiency in the thickness and stability due to the temperature variations, its behavior is not affected by time, it is resistant to microbes and works well within wide PH and viscosity ranges. When the gel is neutralized with a water soluble base, its molecules completely expand and its viscosity is increased, therefore providing a higher resistance to the bullets’ path in such a way that it stops them in a shorter distance without affecting the rifling in the bullets that is produced inside a given gun barrel.

The RDX3’s automated system allows the quick recovery of the test fired bullets, estimating this time to be about one second per each one, that is: from the moment that the bullet is fired by the gun until the bullet is deposited in the recovery basket. This process is very effective compared to other techniques and equipment that have the same function, but that present longer bullet recovery times.

Because of its automation, the RDX3 is more efficient for the institutions that need to recover test fired bullets in a fast and efficient manner when they handle a large quantity of firearms that have to be processed, being such a situation quite common in several countries around the world. Therefore, the resulting amount of time that can be saved by the forensic experts and the operators who handle firearms ballistic registration can be substantial.

The test fired bullets are recovered in good structural condition, therefore, the toolmarks that are embedded in the bullets due to the particular rifling of a gun are consistently reproduced, they are not deteriorated or altered by the path that these bullets take in the interior of polymer ducts, that correspond to a much softer material in comparison to the hardness of the metal that is used in the manufacture of bullets.

Another benefit of the RDX3 is the ergonomic, compact and versatile design of the complete unit. The chamber barrel has a footprint of only 1.20 square meters, a height of no more than 1.85 meters and a total weight of about 585 kilograms, including 235 liters of liquid.

Besides, since it is mounted on a bed with industrial rollers, it can move even 360 degree in short distances. This allows the unit to be versatile, easy to transport, maneuver and move around.

The structures and mechanisms of the chamber adapt ergonomically to human beings’ ordinary physical conditions, allowing the unit to be handled without undue efforts. The users of the chamber are only required to comply with the safety measures for handling the firearms, placing the barrel on the centering device in order to correct the position and orientation of the gun.

In this manner the safety of the users in incremented, preventing possible incidents that can be caused by errors done by the persons who handle the dangerous task of firing the guns from which they are taking a ballistic sample. Once this is done, a signal interrupting fiber optic sensor will automatically turn on the hydraulic pump, which will turn off when the gun barrel is taken out of the centering device. This allows the user to fire as many rounds as he considers are needed and if he finds this necessary, can immediately proceed to open the basket in which the fired bullets are deposited and take them out to use them as needed.

The height of the chamber can also be ergonomically adjusted by a pneumatic system, to conform it to the height or needs of the user in order to allow the shooting of the gun in a standing position with both feet on the ground or on a platform that can be incorporated to the chamber. This allows the user to have a firm and comfortable posture which will prevent uncomfortable inclinations or forced positions during the shooting.

The chamber is installed on industrial guide lines that can more than hold its weight, including the gel it holds.

A 750 kilogram capacity pneumatic shock absorber is connected to the system. Its function is to absorb the kinetic energy produced by all objects that have a mass and are in motion. Since depending on the caliber and the type of ammunition, the bullets fired in the chamber are shot at supersonic speeds and can produce high kinetic energy that need to be absorbed and dissipated quickly once the bullet makes contact with the gel, which presents a high resistance to its path and begins to decelerate it immediately until it stops.

Violent vertical and horizontal movements are generated during this process. The shock absorber, together with the pneumatic actuator, work in such a way that they efficiently dissipate the energy of each fired bullet, moving forward and backwards and up and down until the chamber is once again in its original position. 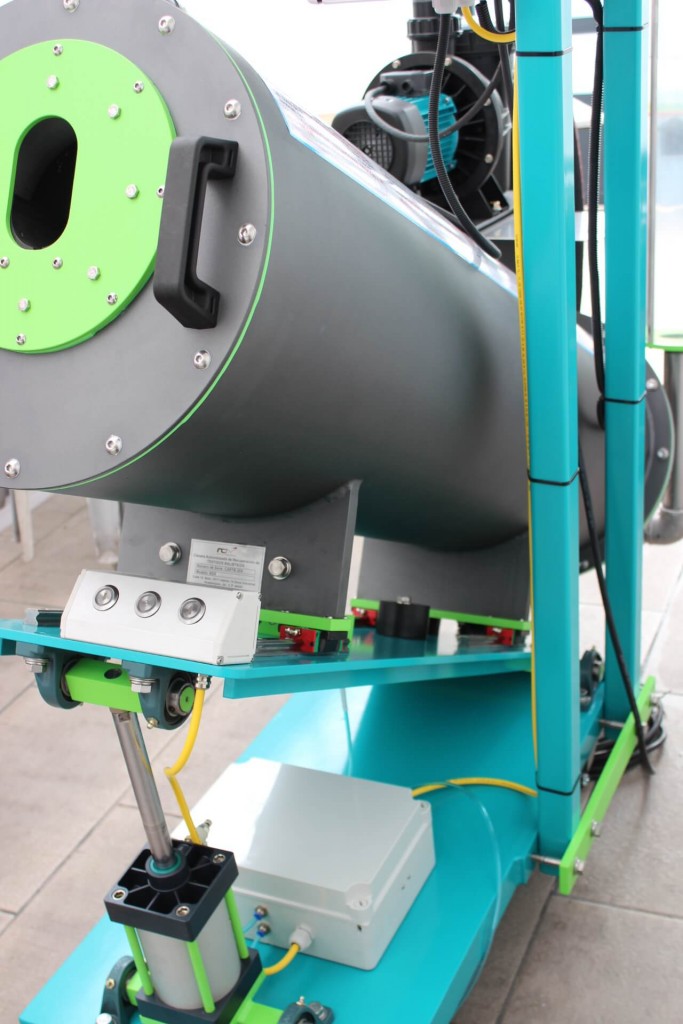 Power: 220 volt, two or three phase with ground is indispensable. The wall socket must be a 3 pole – 4 wire type, Harrow Hart brand, model 3430 or equivalent, or a hanging socket with 3 poles – 4 wire, Harrow Hart brand model 3433 or equivalent. Consumption: 23 amps in 2 phases or 13 amps in 3 phases . The silent non oil air compressor, the ¾ HP head and the 24 L tank require a single phase, 127 volt connection.

Liquid connection: tubing and drainage must be available where the chamber will be installed with the purpose of periodically discharging the liquid through a tube. Running water also needs to be available through a faucet with a 3/4” thread.

Installation: The chamber must be installed on the first floor of the building in an area separate from other specialized areas such as computing or forensic laboratory equipment. This prevents the risks associated with the potential danger when firearms are handled and shot. The minimum suggested footprint for this chamber should be 6 square meters (2×3).

A few of the organisations that have placed their trust in us:

We can provide a bespoke package for you too!

FPA allows us to connect up all our mobile phone data, regardless of which data extraction software is used. Analysis which would have previously taken days and weeks, we can
Jill Wheeler Head of Mobile Phone Forensics, Surrey Police
A collaboration between the Metropolitan Police and Forensic Pathways has successfully led to the development of FDX – a software solution designed by users, for users, to ensure that the
Eddie Fisher Digital & Electronics Forensic Services, Metropolitan Police
ALIAS brings together the latest cutting edge 3D photonics and surface measurement technology the world has ever seen to forensic ballistics; a major step forward in science and technology.
Professor Liam Blunt UK Centre for Precision Technologies

Forensic Pathways™ is an award winning company, who have been at the forefront of forensic innovation for the last 12 years. Working with forensic professionals across the globe, we offer unique data analysis solutions in the areas of mobile/cell phone forensics and criminal intelligence. Whether it is through the development of our Forensic Phone Analyser (FPA), the provision of Forensic Image Analyser for image forensics or the world’s first transparent Stepping Plate for crime scene management, our ability to innovate and bring cutting edge technologies to our clients has led to us being the market leading forensic brand in the criminal and business intelligence sector.